Start of the regional tour of CHESNO.Filter the Judiciary! Campaign with workshops on the impact of judicial reform 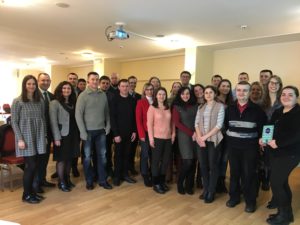 Today, on 13 February, started the regional tour of CHESNO.Filter the Judiciary! Campaign with workshops on the impact of judicial reform on the ground and the presentation of results of the analysis of judges in the Court of Appeal of the Lviv region according to the integrity criteria.

To recap, the CHESNO Movement will hold a series of workshops “Judicial reform: how the public can influence it on the ground”, which will be held within the framework of the all-Ukrainian CHESNO.Filter the Judiciary! Campaign. In February-May, the workshops will take place in all regions of Ukraine.