On Saturday, 11 November, 113 newly elected Supreme Court judges took an oath. The day before, the corresponding Decree on their appointment was signed by President Poroshenko.

Thus, literally, one year after the announcement of the competition, Ukraine yielded the result – the new Supreme Court to be the highest court and to replace the Supreme Court of Ukraine and the four higher courts. Shortly before the Presidential Decree, the CHESNO team talked to the experts to find out when the new Supreme Court will actually start working. So, there is still much work to do, including setting up the new court administration, providing facilities and equipment, and other.

As of today, from the list of all things to do for the court to actually start working, there are 113 judges elected and appointed. The President spoke about their integrity and virtue at the ceremony of taking oath, but it is still to be judged by results of their future decisions and a real work. Although public organizations still have some questions to 25 of them, as those are the ones who received a negative opinion from the Public Integrity Council for opaque wealth, dubious decisions, human rights violations, and other violations of integrity and professional ethics. However, the High Qualifications Commission of Judges and the High Council of Justice did not take into account the facts presented in the conclusions, and the President, with his signature, testified to the dignity of these people to occupy the seats in the Supreme Court. Therefore, the society has a duty to closely monitor the work of the highest court and prevent any violations by new judges. 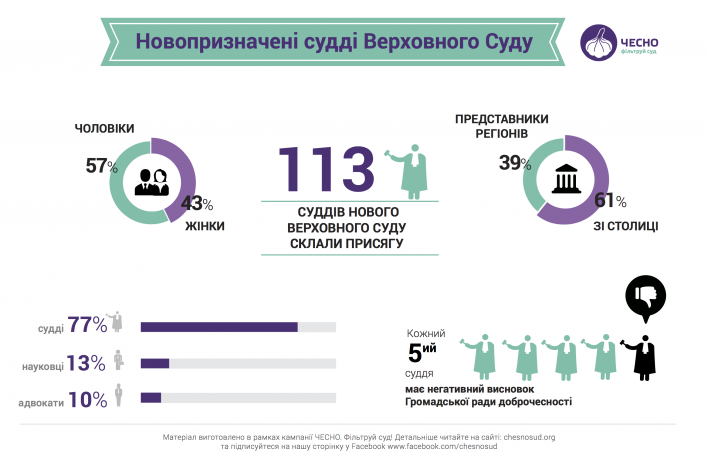 Out of the 114 recommended by the High Council of Justice to be appointed by the President, the Decree was not signed only with respect to Serhii Slynko, who requested Petro Poroshenko to suspend his appointment due to recent information as to his involvement in the decision that enabled Oleksii Pukach to hide from the investigation, which currently is subject for verification.

As a result, 113 new jurists of different backgrounds became the judges in the new Supreme Court. Most of them were acting or former judges, but among the “new blood” highest court judges there are those coming from academic and advocacy communities. 23% (26 judges) of the newly formed Supreme Court have previously worked in universities or practiced law.

Almost 40% of judges of the Supreme Court are judges, lawyers and scholars from various regions of Ukraine. It should be mentioned that the regions with strong law schools – Kharkiv, Odesa, Lviv, Dnipropetrovsk and Donetsk – received the largest representation. However, the vast majority of new supreme judges are representatives from the capital.