Measuring success of the Supreme Court on 100-day scale 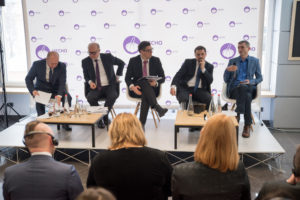 On 29 March, CHESNO Movement within its CHESNO.Filter the Judiciary! Campaign held a forum “100 Days of Work of the Supreme Court”.

Participants of the forum – representatives of the Supreme Court, state authorities, international and civil society organizations – summarized the work of the highest court in the country in its first few months. They have identified the key achievements, discussed the issues, intensity and challenges commonly faced in courts, as well as productivity and effectiveness of the Court’s operation. Supreme Court on the way to ensuring the uniform judicial practice in the country. The average ranking given by the panel members on the scale from -10 to +10 was +6.6. However, the grades by individual participants varied. For example, if the candidate and now-elected Supreme Court judge Mykhailo Smokovych rated the work of the Court at +10, a representative from the civil society, a co-founder of the CHESNO Movement Taras Shevchenko, was more restrained and gave only 2.5 points.

Also, the Chairman of the High Qualifications Commission of Judges Serhii Koziakov noted that the competition to the Supreme Court was conducted through a qualification evaluation, a thorough procedure, albeit not a perfect one. Koziakov reminded that the system’s openness towards the candidates coming outside the judiciary was a novelty: “At the start of the competition, there were 34% of candidates coming outside the judiciary. For the first time, the candidates’ records were published, and their total volume amounted from 300 to 1,800 pages.” Finally, the Chairman of the Commission called on the public and legal community to monitor the second competition to the Supreme Court that the Commission scheduled to finalize the composition of the institution: “Already now, we sense a strong political component of the process – and in the fall, it will be even worse. There will be an enormous political pressure because of the next year’s elections. I suggest everyone to buckle up and follow the work of the High Qualifications Commission of Judges of Ukraine, when it will go on with the second competition to the Supreme Court.”

Director of the Centre for Democracy and Rule of Law, founder of the CHESNO Movement Taras Shevchenko, summarizing the recent developments in the judicial sphere, noted: “The system has changed significantly enough: the testing took place at a completely different level, while the most questions remain as to the interviewing and evaluating the integrity of the candidates,” the speaker stressed.

Shevchenko also stressed that it was necessary to work on improving the format of the High Qualifications Commission of Judges so that not only the judges, but the attorneys and civil society could play an important role in this commission.

Mykhailo Smokovych, Chairman of the Court of Cassation in the Supreme Court, spoke about his own experience of participation in the competition and working in the all-new Supreme Court. Yes, he assessed the success of the newly-established institution at +10 points (on a scale from -10 to +10). According to Smokovych, the results of the first 100 days of work are marked with four main achievements: “The first is the formation of an effective, strong institution bringing young blood to the judiciary. In particular, the administrative court of cassation has six judges with post-doctoral law degrees and 11 have PhD in law. The second achievement goes to the election of the head of the judiciary (Valentyna Danishevska – editorial), who has clearly defined values ​​and is integrating them into the work of the Court. The third, equally important step, is the formation of the Supreme Court’s apparatus to support operation of the Court. The fourth achievement is ensuring openness of the Court, in particular, the possibility of making video records during the hearings.”

At the same time, as Mykhailo Smokovych noted, the judges’ workload in every cassation appeal case is extremely high. For example, the Administrative Court of Cassation chaired by Smokovych at the very start of its operation took over more than 40,000 cases. This is the biggest load among all cassation courts within the Supreme Court.

Kostiantyn Krasovskyi, Head of the Main Department of Legal Policy of the President of Ukraine’s Administration, was “cautiously optimistic” as to the results of the first 100 days of the Court. He also stressed that these changes to the judicial system are of the calibre that can be compared only to the adoption of the Constitution in 1996. To compare, minor judicial reform took place back in 2001 being so far the only one in this sector. “Until now, there were changes only at the legislative level. And we are now talking about the institutional level, with transparency and new people coming in, where the court is the place where policies are developed, where the search for justice for the Ukrainian people is being sought. We see new approaches to the development of court decisions, and new quality of people. After all, an annual competition is a complex evaluation procedure that determines competences in three dimensions: professional, personal and social,” Krasovskyi said.

As a brief assessment of the first hundred days of the Supreme Court, the member of the Public Integrity Council, Roman Kuibida, concluded: “The form has changed, but not the content.” He also shared a survey of more than 300 lawyers that was conducted in late November, when new judges were appointed. Roman Kuibida pointed out that five most anticipated innovations were:

Roman Kuibida noted certain progress only as to the form of court decisions. At the same time, according to him, the new form of court decisions is not evenly used by the whole Supreme Court. Also, critical remarks have already been made to the content of certain well-known decisions. “So far, I do not see a new quality: we don’t have enough of new blood, its amount is not critical,” Kuibida summed up his vision of the upgraded Supreme Court.

To recap, the end of March marked the 100th day of work of the new Supreme Court.