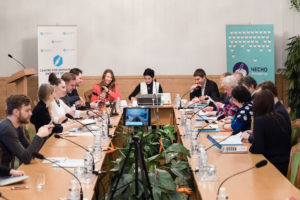 On 7 February, the CHESNO Movement, as part of the CHESNO.Filter the Judiciary! Campaign, held an expert discussion in Kyiv: “Judge Assistants: Legal Status and Place in the Judicial System”. At the event, representatives of the State Judicial Administration of Ukraine, the courts of higher instances, international experts, experts of specialized NGOs, specialists in law and the judiciary discussed the problems of the position of judge assistants in Ukraine, their official legal status, procedures for recruitment, internship, professional development, etc. The main points of discussion were the corruption risks associated with the lack of status of a state official for judge assistants, the tools for controlling the work of judge assistants and the procedure for their selection.

During the discussion, the experts noted the important role of judge assistants in the judiciary, as these people are engaged in selection of applicable law and essentially, prepare draft decisions, which are further adopted by the judge. Thus, the judge assistants are doing an extremely important and difficult job that requires extraordinary professionalism. However, innovations regarding the status of judge assistants introduced during the reform, can negatively affect the current state of affairs. During the event, experts emphasized that the judge assistants used to be qualified as civil servants, and therefore, were elected to the post as a result of the relevant competition; they also bore the responsibility, regularly reported on their activity and were required to undergo a qualification upgrade procedure.

During his speech, senior analyst of the CHESNO.Filter the Judiciary! Campaign Ivan Piatak gave an example of the Poland’s experience, drawing experts’ attention to the fact that in the neighbouring country, candidates to judge assistants go through a competitive selection process, and further undergo mandatory training and internship during the year.

Discussing the status and place of judge assistants, the lawyer of theTransparency International Ukraine Maksym Kostetskyi listed possible corruption risks that arise when judge assistants do not have the status of civil servants. “For example, judge assistants may receive gifts, may become members of political parties, may work in law firms that can be directly related to certain lawsuits,” said Kostetskyi.

Member of the High Qualifications Commission of Judges of Ukraine and retired judge Stanislav Shchotka shared his own experience of selection and work with judge assistants. During his career as a judge, Mr. Shchotka was guided by the criteria of professionalism and level of knowledge when selecting the assistants. He conducted individual tests for candidates and the high level of theoretical knowledge of the candidates, their professional ambitions, substantial application of knowledge and experience, were the main grounds for his final decision as to the candidates.

In his turn, the head of the EU project “Support to Justice Sector Reforms in Ukraine” Dovydas Vitkauskas shared the European experience regarding the judge assistants. He formally divides these activities into two types – the “Luxembourg” type of assistants where the judge assistants directly depend on the judges, and the “Strasbourg” one where, in fact, judge assistants and judges are two separate independent levels within the court system, and an assistant depends on the judge only functionally. He suggested that in Ukraine, the combination of these two approaches could be the best-balanced option.

To recap, the judicial reform in Ukraine continues and public attention is focused on the issue of cleansing and upgrading the judicial system. However, speaking of the judiciary, it is necessary to focus not only on judges. Judge assistants are also very important actors, they total to almost 7 thousands all over Ukraine. In 2017, the High Qualifications Commission of Judges started the recruitment for judges, where the persons who have worked as judge assistants for at least three years, have substantial privileges, being able to get to the pool under the simplified procedure.