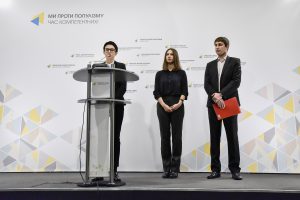 52.5% of the judges of the capital are unscrupulous – those are the results of analysis conducted by the CHESNO Movement, presented on 26 October. According to CHESNO, these judges have violated at least one integrity criterion, that is, they have made dubious rulings, have opaque wealth, are involved in corruption or criminal proceedings, violations of human rights, or have violated professional ethics.

A total of 369 judges are working in 12 capital courts in Kyiv city that were analysed by the CHESNO Movement, as part of the CHESNO. Filter the Judiciary! Campaign. CHESNO targeted the courts of first instance: the Economic Court of Kyiv city, the Administrative District Court of Kyiv city and 10 district courts.

The highest percentage of dishonest judges (more than 60% of the total number of judges in these courts), according to CHESNO, works in the Pecherskyi, Shevchenkivskyi and Solomyanskyi district courts. For example, the Pecherskyi District Court employs Serhii Vovk, who was the chairman of the panel of judges that sentenced Yurii Lutsenko to 4-year imprisonment. A criminal proceeding was initiated against the judge for forgery and use of a fake court decision. The judge of the Shevchenkivskyi District Court, Volodymyr Buhil, violated four of the five integrity criteria developed by the CHESNO Movement, in particular, he made dubious rulings against the activists of the Revolution of Dignity. Judge Oleksandr Bobrovnyk, who works in the Solomyanskyi District court, who in spring this year, became famous due to the Roman Nasirov case. However, Bobrovnik violated the integrity criteria for making dubious decisions in other cases, in particular, closing the criminal proceedings against Iu. Ivaniushchenko for the embezzlement of Kyoto millions. 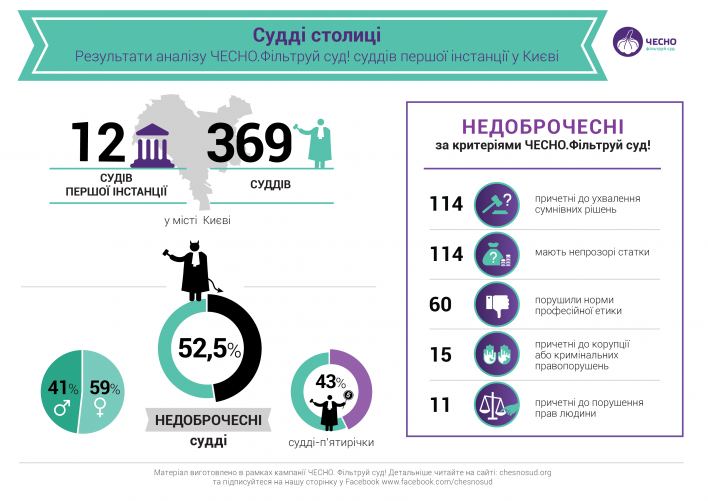 When preparing the profiles, analysts in the CHESNO. Filter the Judiciary! assessed the integrity of judges according to five criteria, using information from reliable open sources.

According to the results of the CHESNO assessment, 114 judges were involved in dubious decisions. In particular:

Ruslan Arsirii (Administrative District Court), who, according to law enforcement officers, as member of the panel was involved in delivering judgments while being abroad. Recently, judge Arsirii has legitimized the secrecy of the declarations of the Security Service of Ukraine when considering the case at the suit brought by the Anti Corruption Action Centre.

Liubomyr Holovatiuk (Economic Court of Kyiv city), who was involved in decisions that in fact legitimized the transfer of Mezhyhirya to companies controlled by Viktor Yanukovych.

114 “servants of Themis” have opaque wealth. In particular:

Ievhenii Ablov, one of the five most frequent travellers of the Administrative District Court. In spring 2012, the judge visited Greece, Cuba, Egypt, OAU and Turkey, and in spring 2013 – Germany, Greece, Singapore, Turkey and the OAU.

Viktoriia Dzharty (Economic Court of Kyiv city), who for eight years being judge have “judged” for: two houses of 386 and 268 square metres, respectively, a house of 610 square metres, Bentley Continental 2012, significant amount of money both on bank accounts and in cash. In 2012, Dzharty paid 2 million 300 thousand hryvnias for the new Bentley, that is, almost 300 thousand dollars. 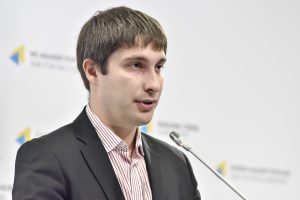 60 – violated the rules of professional ethics. In particular:

Viktoriia Kytsiuk (Solomyanskyi District court), featured in the incident with capital police, when she blocked the traffic on a narrow street, ignoring the request of law enforcement officers to present her documents and trying to leave the scene.

Halyna Bondarenko (Holosiivskyi District court), who has posted on the Internet a photo of a feast with alcoholic drinks right in the courtroom.

15 judges are involved in corruption or criminal offenses. In particular:

Pavlo Vovk (Administrative District court), against whom the investigation by National Anti-Corruption Bureau of Ukraine is ongoing on alleged illegal enrichment revealed by the analysis of his e-declarations.

Alla Pryhunova (Economic Court of Kyiv city), who is accused of receiving a bribe of USD 20,000.

11 were involved in violations of human rights. In particular:

Olena Pervushyna (Holosiivskyi District court), who closely controlled an active engagement of the Holosiivskyi court in the persecution of activists during the Revolution of Dignity.

Olena Khomenko (Holosiivskyi District court), who denied access to justice on grounds not foreseen by law (no timely notification was given of the place and time of the trial, a copy of the resolution was not sent to the person against whom it was adopted). 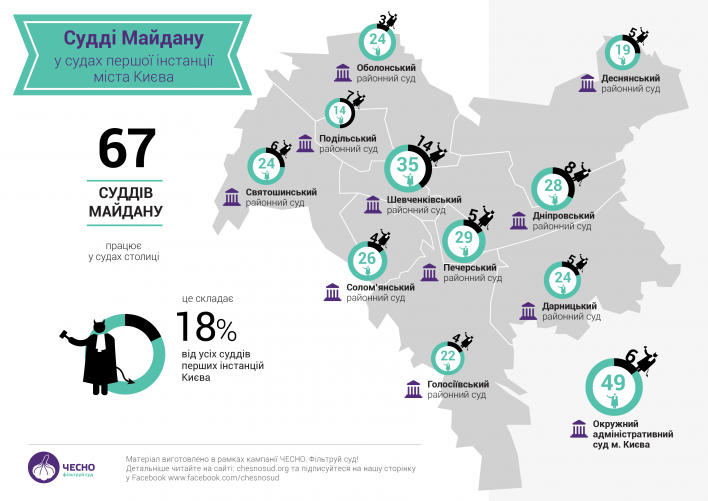 CHESNO. Filter the Judiciary! paid special attention to “Anti-Maidan judges”, who made decisions against activists of the Revolution of Dignity. 67 on those still work in the first instance courts, which is almost 20% of all Kyiv judges. And 40% of them hid these facts in their integrity declarations. According to the CHESNO analysis, the decisions against Maidan were taken by half of the judges of the Podilskyi district court, 40% of the judges of the Shevchenkivskyi District court and over a quarter of judges in the Sviatoshynskyi, Dniprovskyi and Desnianskyi district courts. Bohdan Sanin, one of the most notorious Anti-Maidan judges in Kyiv, has banned rallies on Independence Square, European Square, Bankova Street, Hrushevskoho Street, Bohomoltsa Street from 1 December 2013 until 7 January 2014.

Profiles about the judges were published by the CHESNO. Filter the Judiciary! Campaign on its website and will be submitted to the High Judicial Qualifications Commission of Ukraine and Public Integrity Council to be used during the qualification assessment of judges of Kyiv city.

The CHESNO movement collects information according to its own methodology from publicly available sources and does not allege that a person has committed an offence or is guilty of it. Conclusions made by CHESHO as to the judges’ dishonest practices constitute the value judgments which may not correspond to the official decisions and conclusions of the government authorities.

Full database of the profiles of Kyiv judges at: chesnosud.org/suddi-kyyeva/