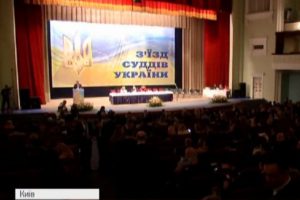 On 5-6 March, delegates to the Congress of Judges of Ukraine elected new members of the High Council of Justice and the High Qualifications Commission of Judges.

The CHESNO movement as part of the CHESNO. Filter the court! Campaign analysed all the candidates and made the list of dishonest judges who do not belong to this institution. Candidates who got into the “dark-horse” candidates’ list made by the CHESNO movement, violated one or several integrity criteria established under the methodology developed by CHESNO.Filter the Judiciary! Campaign. In general, 16 out of 34 candidates to the High Council of Justice were identified as “dark horses”, according to CHESNO.Filter the Judiciary! Campaign. As for the “dark horses” among the candidates for the High Qualifications Commission of Judges, there were six of those out of eight.

Two candidates have been nominated to the ballot by the quota for judges from the general court judges and retired judges. First was Tetiana Chumachenko – a retired judge of the High Administrative Court in Ukraine. In the first round of voting, 95 delegates voted for Tetiana Chumachenko. The second candidate was Serhii Hyrych, a judge of the Lychakivskyi District Court of Lviv city, supported by 88 delegates.

The Congress also formed the new Council of Judges of Ukraine. Oleh Tkachuk, a judge from the Supreme Court, was elected as chairman, and Oksana Marchenko, the judge of the Economic Court of Kyiv city, was elected as secretary of the Council.