CHESNO.Filter the Judiciary! revealed “dark horses” among the candidates to High Council of Justice and High Qualifications Commission of Judges 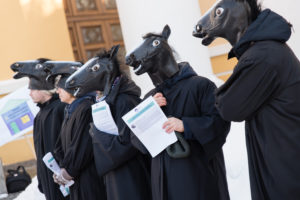 On 5 March, the CHESNO movement, together with the Reanimation Package of Reforms, the Anti Corruption Action Centre, the AutoMaidan and the DEJURE Foundation held an event by the October Palace in Kyiv to reveal the “dark horses” from among the candidates who stood up before the Congress of Judges to be elected as representatives to the High Council of Justice and High Qualifications Commission of Judges.

Roman Maselko, lawyer of the All-Ukrainian NGO “AutoMaidan”, emphasized that dismissal of “Anti-Maidan judges” is crucial, and their fate in the judiciary will be decided by the High Council of Justice. “After two years, the High Council of Justice has demonstrated that the expectations of the public have not been met. The Council kept 85% of Anti-Maidan judges as is.”

“The judicial system depends on the quality of the composition of the High Council of Justice and the High Qualifications Commission of Judges. The list of candidates shows that those will be composed of, in particular, the judges who were identified as dishonest by the Public Integrity Council. Those are the judges who were dismissed for violation of the oath, judges who banned the video recording of the court’s hearings, the judges who otherwise discredited themselves,” added Maselko.

Vitalii Shabunin, chairman of the Board of the Anti Corruption Action Centre, said that if dishonest judges eventually get to the High Council of Justice and the High Qualifications Commission of Judges, that would mean that the judiciary is not capable of self-cleansing.

At the end of the briefing, the activists also conducted theatrical performance, where they illustrated the “dark horses” who want to get to the key judiciary bodies.

In particular, the “List of dark horse candidates” made by the CHESNO Movement includes the judges who made dubious decisions, in particular, against EuroMaidan activists, judges who violated human rights, conceal their own property or lead an unaffordable life. There are also the “servants of Themis”, who helped their colleagues avoid responsibility for violations and those who demonstrated a low level of knowledge of law during examination for the competition to the Supreme Court.

To recap, on 5-6 March, the Congress of Judges will gather in the October Palace to bring together the delegates from all over Ukraine. The key issue in the agenda of the Congress is the election of representatives to the High Council of Justice, the High Qualifications Commission of Judges, and the election of the Council of Judges of Ukraine. The public will hold a campaign to call the delegates on giving the system a chance to cleanse the key judiciary bodies and not to elect the candidates from among the “dark horses”.