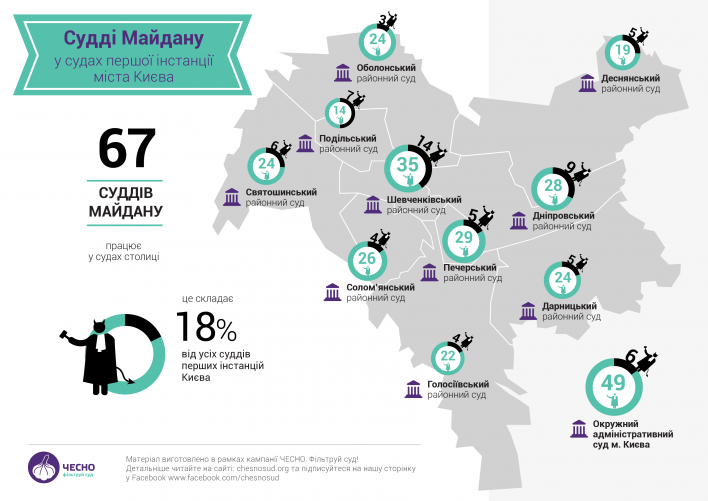 Another one is Yevhenii Ablov, a judge of the Kyiv city Administrative District Court. On 9 December 2013, judge Ablov passed a resolution requiring representatives of the Ministry of Internal Affairs, Ministry of Emergency and Kyiv City State Administration to clear Independence Square and central streets of Kyiv from protesters.

Judge of the Shevchenkivskyi District Court, Volodymyr Buhil imposed a pre-trial restraint in the form of a custody detention against the activist Andrii Dzyndzia in connection to the events that took place during the protest on 1 December 2013 on the Bankova street. Judge Buhil gave permission to search the premises owned by the EuroMaidan activist Kaduria. It was Buhil who released on bail notorious Vadym Titushka. Also, in December 2011, judge Buhil filed a criminal case against the Tax Maidan activists, who were accused of damaging the pavement on Independence Square in the autumn 2010.

Judge of the Solomianskyi District Court Liudmyla Kiziun imposed a pre-trial restraint in the form of detention against a participant in the mass protests on 19 January 2014 on the Hrushevskoho street in the Kyiv city.

Oleh Linnyk, a judge of the Shevchenkivskyi District Court of Kyiv city, deprived a citizen of Ukraine of the right to drive the vehicle because he allegedly did not stop at the request of the traffic police inspectorate on 29 December 2013 (the day when the protest was held – the “AvtoMaidan” drive to the residence of President Yanukovych in Mezhyhirya).

The Shevchenkivsky District Court of Kyiv is considering an indictment regarding the judge of the Pecherskyi District Court of Kyiv city, Viktor Kytsiuk, for deliberately illegal ruling aimed at unlawful prosecution of AvtoMaidan participants during mass protests in the period between November 2013 and February 2014.

With the close guidance by the then Chairperson of the Holosiivskyi Court, Olena Pervushina, the court actively joined the persecution of activists during the Revolution of Dignity.

Profiles about the judges were published by the CHESNO. Filter the Judiciary! Campaign on its website and will be submitted to the High Judicial Qualifications Commission of Ukraine and Public Integrity Council to be used during the qualification assessment of judges of Kyiv city.

The CHESNO movement collects information according to its own methodology from publicly available sources and does not allege that a person has committed an offence or is guilty of it. Conclusions made by CHESHO as to the judges’ dishonest practices constitute the value judgments which may not correspond to the official decisions and conclusions of the government authorities.