The path to being a judge: judge assistants have 9-month leeway before practicing lawyers

Ukraine has recently formed a serious void in the judiciary with the courts of all levels having a shortage for a third of all judges needed. This situation is partly caused by the dismissal of judges for violation of the oath, the active “drop-off” of judges resigning after the start of the reform, a significant number of “five-year judges” without authority, and the exhaustion of the judges’ pool. The latter was formed back at the Yanukovych times.

In order to partially resolve the shortage of personnel and to fill vacant seats, in April 2017 the High Qualifications Commission of Judges announced the selection of candidates for the position of local court judges, since the situation with shortage of judges in the regions has been the most critical. Under the conditions of competition, lawyers with five-year experience and assistant judges with the relevant professional experience of three years has the chance of becoming the first instance judges.

5,336 people volunteered in upgrading the judicial system – this is the number of those who submitted the documents to the High Qualifications Commission of Judges. Of these, 2,260 are assistant judges and 3,076 are practicing lawyers. Those not having problems with their documents as per analysis of the High Qualifications Commission of Judges will be admitted to the subsequent selection stage. The next stage will be the qualification examination, a special test involving anti-corruption bodies and the longest stage – special training at the National School of Judges. However, the equality for lawyers and assistant judges is over at the stage of training at the School of Judges. The law provides for special conditions for assistant judges, which gives them at least 9-month leeway before the lawyers coming outside the system. 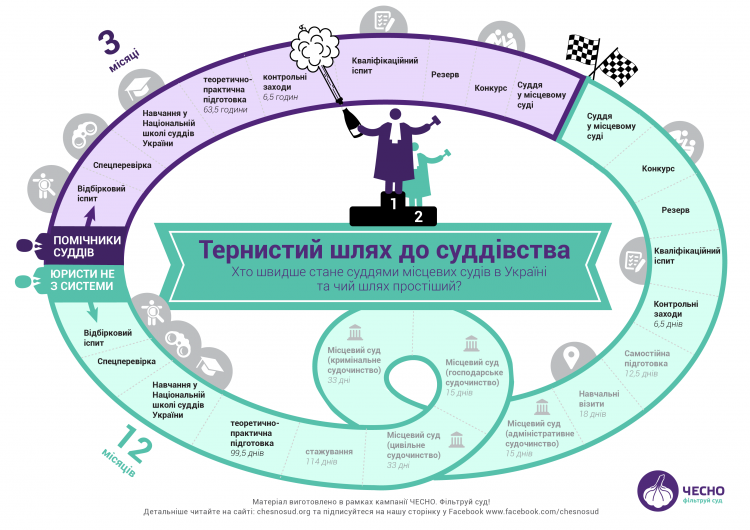 Judge assistants with three years of experience will become judges in local courts much earlier than their lawyer colleagues, whom the National School of Judges offers to study for 12 months (232.5 academic days) against 3-month (70 days) training for judge assistants. Moreover, the lawyers will not only have a theoretical training which is much longer, but also almost half an internship in various courts, prosecutor’s offices and other institutions. The so-called maze towards becoming a judge for lawyers is compounded by a much more elaborated curriculum. While the judge assistants study 6 days per week, the lawyers will have to study no more than 5 days a week. Similarly, the number of academic hours per day for judge assistants is 12, and lawyers have only 8. With such a dense training schedule, judge assistants will be much faster to receive special training and get to the pool, from where, in fact, they can apply for competition for judges in local courts. 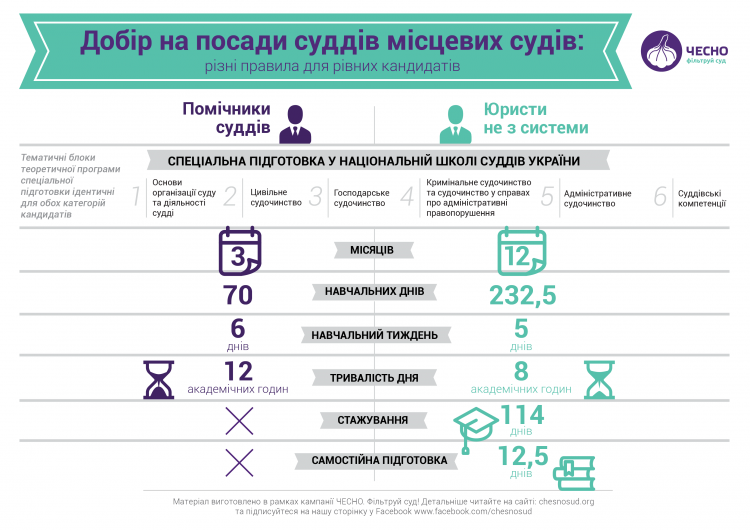 Thus, judge assistants will occupy places in local courts much earlier than their lawyer competitors. The lessons learnt from the competition to the Supreme Court, which is currently at its final stage, show that attorneys and academicians admitted to compete for positions in the highest court, have remained in the minority throughout the competition, and only 20% of them out of all applicants got to the final.

Upgrading the judicial system with new people with new views and perspectives is an important part of the reform and the process of restoring trust in the judiciary. The incentive to serve the country for successful lawyers may be the salary of a judge, which has significantly increased after the reform. A judge of the first instance, for example, in a district court, will earn from $1,000. The wages of the Supreme Court judges will amount to almost $10,000, depending on the length of service and other factors affecting accrual of salary. However, such a lengthy selection procedure for a judge in a local court, which excludes the possibility of continuing, for example, law practice, makes practitioners think twice about their ability to spend more than a year studying at the National School of Judges with a scholarship that is equivalent to the salary of an assistant judge (about UAH 6,000).

The curriculum currently exists only as a draft developed by the National School of Judges, to be approved by the High Qualifications Commission of Judges. The latter, as a result of the reform, has become an extremely important body for deciding on a judge’s career, since it is the Commission that conducts all competitions and qualification assessments of existing judges. In fact, qualification assessment is the final stage in the selection of judges to local courts and the point of entry into the judicial system. The new law on the judiciary and the status of judges, in addition to procedure for the selections and assessment of judges, vested on the Commission the responsibility for the procedures and setting the timeline of the competitions. Thus, the law sets out the period for training at the National School of Judges for 12 months, however, it gives the Commission the right to decide on a different time period. The legislator has provided such a right to the Commission in cases of, for example, a shortage of judges in the country. As a matter of fact, in case of a critical shortage of judges, the Commission and the School of Judges can expedite the training process. So far, such acceleration in special training process is applied only to judge assistants. According to the President of the National School of Judges Mykola Onishchuk, judge assistant should also be trained for at least six months, and the reduction in duration of the training was an ad-hoc decision to quickly fill vacant seats in local courts.

The selection procedure and the difference in length and training programs for judge assistants and lawyers were discussed at the round table organized by CHESNO. Filter the Judiciary! in cooperation with the Reanimation Package of Reforms. Lawyers, representatives of the Public Integrity Council, the High Qualifications Commission of Judges, the National School of Judges and candidates participating in the selection for local judges joined the discussion. They voiced a number of arguments for the pros and cons of reducing the terms of training for lawyers. The National School of Judges, in turn, invited the round table participants to further discuss the issue directly at the National School of Judges, which is responsible for the development of curricula and for the training of candidates for the positions of judges.