The judges who ruled against and tried EuroMaidan activities, serve justice in courts of appeal of the capital and the region. Analysis by CHESNO.Filter the Judiciary! 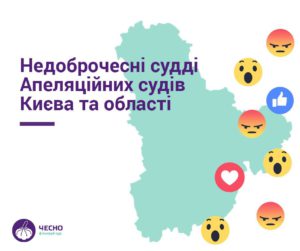 Appeal is a court instance reviewing the decisions of the first level judges. The public’s expectations therefore are for the most rigorous consideration and adjudication in cases lost in courts of the first instance. CHESNO.Filter the Judiciary! while working on a database of the profiles of all Ukrainian judges, analysed the “servants of Themis” in Kyiv City Court of Appeal and the Kyiv Regional Court of Appeal. In total, these two courts employ over 120 judges: 79 in the appeal of the capital and another 44 – in the regions.

Out of the 79 judges of the Kyiv City Court of Appeal, 36 (45%) violated the integrity criteria developed by the CHESNO Movement, including approving political decisions. In particular: 14 judges were involved in adopting dubious decisions, 18 have opaque wealth, 2 demonstrated unethical behaviour, and 2 were involved in human rights violations.

Out of 44 judges of the Court of Appeal of the Kyiv region, 24 are dishonest judges (54%). Of these, 10 were involved in dubious decisions, 14 have opaque wealth, 9 demonstrated unethical behaviour.

Olha Yurdyha, a judge of the Kyiv City Appeal Court is famous for her decision in 2011, when as a member of the panel reviewing the verdict of the judge Kirieiev of the Pecherskyi district court as to 7-year imprisonment for Yuliia Tymoshenko. The Kyiv City Court of Appeal upheld this decision. To recap, the verdict was then condemned by the European institutions, and by the decision of the European Court of Human Rights in the case of “Tymoshenko v. Ukraine” that recognized that this ruling was the result of politically motivated persecution.

The decision of the fellow-judge Liudmyla Ukrainets, has also been subject to review by the ECHR. She upheld the decision of the Pecherskyi District Court against a journalist of the newspaper “Vechirni Visti” that dared to criticize Hanna Herman, who at that time was a candidate for people’s deputies. The European Court of Human Rights has found Ukrainian courts violated freedom of expression as well as provisions of Article 10 of the European Convention on Human Rights.

Valerii Lashevych, judge of the same Kyiv City Court of Appeal, in 2011, decided to extend the term of detention for Yuriy Lutsenko. Lutsenko himself later demanded to bring to justice judge Lashevych and other panel judges for such a decision. In the case “Lutsenko v. Ukraine”, the European Court of Human Rights came to the conclusion that Lutsenko’s detention was arbitrary and incompatible with the objectives of the Convention for the Protection of Human Rights and Fundamental Freedoms. Judge Lashevych also became famous because of the decisions in cases against Berkut officers. The judge presided at the panel (which also included the judge of the same court Ivan Rybak) that delayed four times the consideration of the appeal regarding the decision of the Pecherskyi district court in Kyiv city on changing the interim measure against Dmytro Sadovnyk. Sadovnyk was accused of murdering 39 people on the Maidan and Pecherskyi district court ruled for the interim measure to be changed from being held under custody to home arrest. Sadovnyk eventually escaped from home arrest and was put on the wanted list. Valerii Lashevych, along with his colleague Viacheslav Dziubin, also chaired the panel that changed the interim measure from detention to the house arrest for another Berkut officer Oleksandr Bielov, suspected of murdering 18 people on the Maidan. Subsequently, the suspect, Oleksandr Bielov stopped contacting his lawyer and did not appear during court sessions.

Viacheslav Dziubin, a judge of the Kyiv City Court of Appeal, was also involved in other decisions regarding the Berkut officers. He was a member of the panel who chose an interim measure in the form of personal recognizance for Vitalii Honcharenko, who was charged with more than 33 attempted killings and the murder of three EuroMaidan activists. After changing the interim measure, Honcharenko and his three former colleagues fled to Russia. The same judge presided over the panel, which upheld the verdict of the Holosiivskyi district court on the conviction of Dmytro and Serhii Pavlychenko. To recap, the witnesses questioned during the trial indicated that they did not identify the defendants as the killers and doubted the fact that the investigators correctly recorded their words for the protocols. Other evidence to prove Pavlychenkos’ fault is also questionable. Judge Dziubin is also known in the media for the decision cancelling the seizure of USD300 million of the Panama company “Restwood Products Corporation” with account with the Bank of Liechtenstein. The General Prosecutor’s Office of Ukraine believed that this Panamanian company was controlled by Svitlana Yemelianova, the wife of the judge of the Supreme Economic Court Artur Yemelianov.

Dmytro Sokurenko, a judge of the same court, was chairing the panel that approved the decision to cancel the arrest of USD300 million USD of the Panama company “Restwood Products Corporation”. The property of judge Sokurenko was estimated at more than USD1.36 million, or almost UAH33.7 million (as of July 2016). In particular, the house of an area of ​​534 square metres in Pecherskyi district of Kyiv city, estimated by experts at USD1.25 million, the apartment in the Kyiv city centre worth of USD80 thousand, a residential house in the Kyiv region with an area of ​​183.5 square metres. In the investigation, the journalists pay attention that Sokurenko could afford all this property, even though practically all his life, he worked as the Chief of the Department of Justice in Kyiv city and the judge.

Another judge of the Court of Appeal of Kyiv city, Dmytro Herashchenko, who participated in the competition to the Supreme Court last year, featured in the bribery case in 2009. According to the legal counsel of the municipal enterprise “Administration of house No.18” provided during the hearings, he, while in the office of a judge, allegedly handed Herashchenko an illegal financial reward of USD200 for accelerating the consideration of court cases. The judge himself during the qualification evaluation stated that the case was closed due to the absence of elements of the crime.

In general, more than half of the judges of the Kyiv Regional Court of Appeal violated the integrity criteria developed by the CHESNO Movement. Like their fellow-colleagues from the capital’s court of appeal, the judges made dubious decisions, which has also become the trend. These “servants of Themis” from the regional appeal during EuroMaidan approved decisions against the activists, and in particular, against AutoMaidan activists. Judges Oksana Rudnichenko, Viktor Harbriiel and Iryna Yashchenko rejected the complaints by persons whose driving license was suspended by the first-instance courts’ decisions because they allegedly did not stop at the request of the traffic inspectorate on 29 December 2013 (the day of the protest rally – AutoMaidan trips to the residence of President Yanukovych in Mezhyhiria). Their colleagues Oleksandr Hrynenko and Yurii Sementsov also upheld the decisions of the first instance courts in identical cases, albeit with shorter terms for the license suspension.

It is also worth mentioning other anti-Maidan judges. They are still working in the Court of Appeal of the Kyiv region: Yurii Slyva, Serhii Zhurba and Andrii Dryha.