The first month of qualification evaluation of Ukrainian judges. Analysis by CHESNO.Filter the Judiciary! 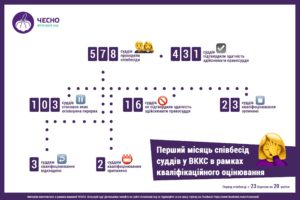 The CHESNO movement within the CHESNO.Filter the Judiciary! Campaign analysed the results of interviews and also, the judges, who were interviewed during this period as part of the qualification evaluation.

In total, during this period, the High Qualifications Commission of Judges conducted interviews with 578 judges who appeared for qualification evaluation. As a result of the interviews, 431 judges confirmed their ability to administer justice. This means that these judges will continue to work in the judiciary for a much higher salary, since the reform provides for an increase in salaries for judges who successfully passed the evaluation. 16 judges failed the evaluation; recommendation for their dismissal will be submitted to the High Council of Justice. A break was announced as to another 103 “servants of Themis”; it means that the Commission will take the decision on them later. The qualification evaluation as to 23 judges has been suspended; it was stopped as to another two of them. Decision as to 3 other judges has been postponed.

According to the results of the first month of interviews in the process of evaluation, the vast majority of judges successfully passed the examination and kept their positions. However, among such “servants of Themis” there are many judges with dubious reputation and status. CHESNO.Filter the Judiciary! Campaign when working on the profile database of all Ukrainian judges, has formed the profiles of those who are at the moment taking qualification evaluation.

For example, Volodymyr Azevych, a judge of the Court of Appeal of Donetsk Region, successfully passed the qualification evaluation, although he failed to qualify to the Supreme Court and left the competition on the interview stage. At the same time, the Public Integrity Council also issued a negative conclusion as to Azevych due to incomplete and incorrect filling of the property declaration. Anzor Saadulaiev, judge of the Shevchenkivskyi District Court of Kyiv city, also remained in his position. During EuroMaidan, he withdrew the driving license of the one AutoMaidan activists. He also sentenced Vasyl Liubarets, the initiator of the Vradiivka protests, to up to 10 days of the administrative arrest having found him guilty of violating the rules of peaceful assembly.

Inna Belokonna, the judge of the Obolonskyi district court of Kyiv city, incorrectly declares her estate, will also continue working as judge. In particular, in her declaration for 2015, she indicated about USD200 thousand in a bank account, and in 2016, there were no money on the same bank account and it is not known what the money was spent on. At the same time, according to journalists, Belokonna’s previous last name is Portnova. She was the wife of Andrii Portnov, who served as deputy head of the President Yanukovych Administration.

The profiles of judges who have successfully passed the qualification evaluation, however, violated the integrity criteria developed by the CHESNO.Filter the Judiciary! Campaign are available on the links below. The conclusions of the Public Integrity Council on the judges going through qualification evaluation are published on the Council’s website.