15 December is the date for official launch of the newly formed Supreme Court of Ukraine. This date was determined by the judges themselves at the plenary session held on 30 November. So, from this day on, the new highest judicial body will begin to consider cases, and the Supreme Court of Ukraine and the three higher specialized courts will be liquidated.

As part of four cassation courts (criminal, civil, economic and administrative), the Supreme Court will establish the relevant chambers of courts for consideration of certain categories of cases, taking into account the specialization of judges. Judges of these judicial chambers presented in the panel of judges will ensure a cassation review of court decisions of the courts of the first and appellate instances. Similarly, the judicial chambers of the relevant cassation courts will analyse court statistics and study court practice. 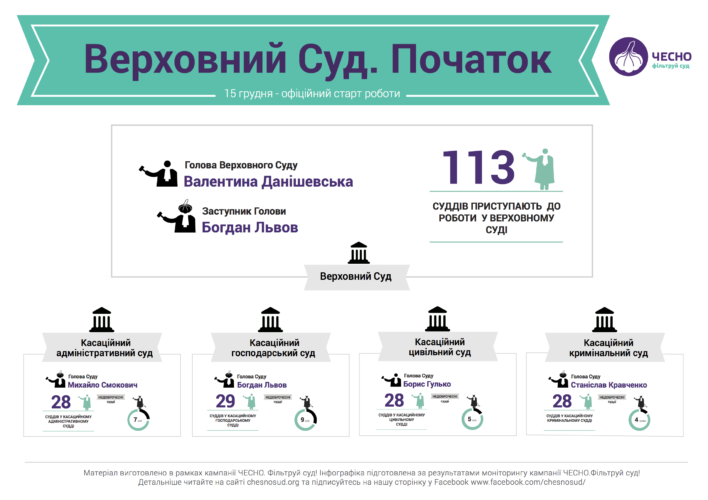 The Supreme Court will start with 113 judges. In the near future, the High Council for Justice may recommend more candidates for appointment from among those for whom it had previously suspended the decision.

Most of the new judges of the Supreme Court are acting or former judges, however, representatives of academia and advocacy were also added to the highest court. 23% (26 judges) of the newly formed Supreme Court previously worked at universities or engaged in academic activities or practiced law.

Almost 40% of judges of the Supreme Court are judges, lawyers and scholars from various regions of Ukraine. It should be noted that the regions with strong law schools – Kharkiv, Odesa, Lviv, Dnipropetrovsk and Donetsk – received the largest representation. However, the vast majority of new supreme judges are representatives from the capital.

An upgrade in the new Supreme Court highly anticipated by the civil society was only partly implemented. There are judges in the new Supreme Court, as to whom the Public Integrity Council gave negative conclusions containing information on violations by judges of the integrity criteria and professional ethics. Despite the public’s efforts, the Supreme Court will have 25 dishonest judges. Economic (32%) and Administrative (25%) Courts of Cassation have the highest concentration of dishonest judges.

Now, the “servants of Themis”, who had in their practice decided to ban peaceful assemblies, will bring justice in the Administrative Court of Cassation. Those include Iryna Saprykina, who banned peaceful gatherings against the controversial reconstruction of the Hostynny Dvir in Kyiv. Her colleague Oleksandr Zolotnikov, who has repeatedly supported the decision to ban peaceful gatherings, in particular, referred to the Decree of the Presidium of the USSR Supreme Council, and not to the Constitution of Ukraine. Moreover, he also made decisions concerning the prohibition of peaceful assemblies in Odesa during the Revolution of Dignity.

Among others, Inna Berdnik, who, as member of the panel, made the decision that was reviewed by the ECHR in the case of Bochan v. Ukraine 2 and found to be grossly arbitrary and a denial of justice, will now judge in the Economic Court of Cassation. Viacheslav Nastavnyi, who was in the panel of judges considering the case of Yurii Lutsenko at the court of cassation and upheld the decision on his imprisonment, will work in the ‘neighbouring’ Criminal Court of Cassation. The case has become internationally acclaimed and condemned by European politicians. Also, the judge upheld the sentence to Dmytro and Serhii Pavlychenko for life imprisonment and 13 years in prison, respectively. Subsequently, they were also recognized as political prisoners. Their colleague, judge of the Civil Court of Cassation, Alla Lesko, while serving as a member of the High Council of Justice, did not investigate the facts and evidence of a possible influence on the judges.

Valentyna Danishevska was elected the chairperson of the Supreme Court. Until 2001, she worked in the Arbitration Court of Zaporizhzhya region, then headed the charitable organization “Commercial Law Centre”. During the competition, the Public Integrity Council did not have any claims to Valentyna Danishevsks and did not submit its conclusion to the High Judicial Qualifications Commission of Ukraine. In contrast, Bohdan Lvov who was elected the Deputy Chairperson of the Supreme Court, received such a conclusion from Public Integrity Council. He also now chairs the Economic Court of Cassation in the Supreme Court. Thus, the judge will combine two administrative positions at the new Supreme Court. Notorious Bohdan Lvov, as a Chairman of the High Economic Court of Ukraine, by its resolution, established a panel of judges of the High Economic Court of Ukraine to consider the commercial cases bypassing the automated system of document circulation. That was the reason for the Kyiv prosecutor’s office to initiate a criminal proceeding which was subsequently closed. But the Lvov’s decision on establishing the panel was cancelled by the Supreme Court of Ukraine precisely due to the lack of an automatic distribution of the said commercial cases. Judge Lvov also features in resonant public scandals related to his professional activities. This, for instance, is the case of a member of the High Council for Justice, Pavlo Hrechkivskyi. According to the media, the latter allegedly promised USD 500,000 to secure the “right” decision through the Chairman of the High Economic Court of Ukraine Bohdan Lvov.

The Court of Cassation with the Supreme Court is now chaired by Mykhailo Smokovych, whom the conclusion from Public Integrity Council did not prevent from taking such an important position. Judge Smokovych, in the panel of judges, cancelled the submission of the High Council of Justice on the dismissal of judges who made the decisions against activists of the Revolution of Dignity.

The Court of Cassation is chaired by Judge Borys Hulko, who was awarded firearms by the Ministry of Defense “for impeccable long-term work.”

The Criminal Court of Cassation with the Supreme Court will be chaired by Stanislav Kravchenko, who in 2003, together with his colleague Serhii Slynko amended the detention of Oleksii Pukach replacing it with a travel restrictions (recognizance not to leave), which allowed Gongadze’s murderer to escape and hide.