Judges under the Hammer 2

How criminal proceedings upon the facts of possible misappropriation by judges are conducted.

Last year, we made a review of the criminal proceedings initiated upon the facts of illegal benefits received by the judges that were referred to the court by the representatives of NABU and Specialized Anti-Corruption Prosecutor’s Office. It’s time to check how these cases are considered today.

According to information available on the official NABU website, as of mid-August, 12 criminal proceedings, which deal with facts of possible misappropriation by judges are being taken by the courts. In these criminal proceedings, the guilty verdicts were reached as to nine judges. A year ago, we wrote about five judges in such cases, none of which is punished yet. The cases of judges Medentsev, Plevako, Krentsel, Horbatenko and Laziuk have been in courts for more than a year. The case of Judge Olena Horbatenko has been considered for 17 months, and judge Oleh Plevako died while his case was considered, but even after his death, the trial has already been going for 12 months. 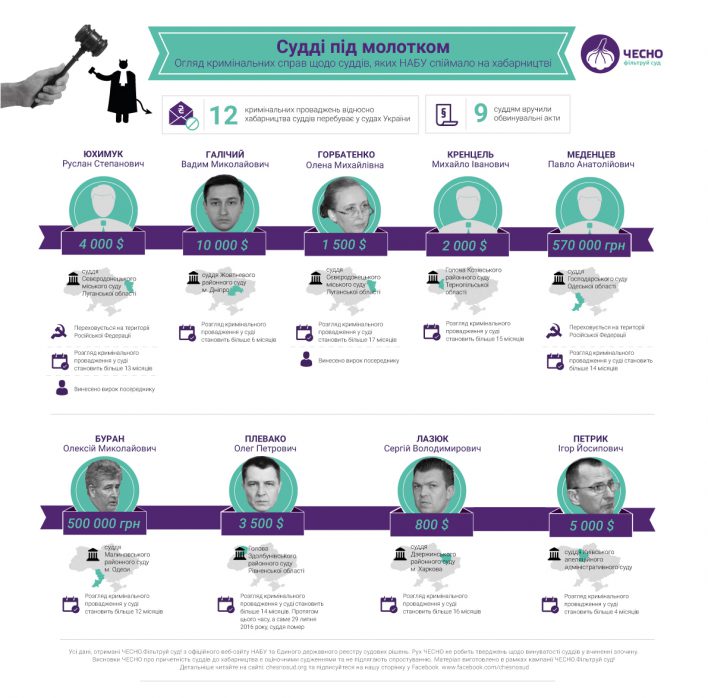 Analysis of these cases reveals some trends.

For example, judges can escape justice while formally remaining in office. For example, two out of nine judges escaped justice, probably to the Russian Federation. This is judge Yukhymuk Ruslan Stepanovych from Sieverodonetsk City Court of Luhansk region and Medentsev Pavlo Anatoliiovych from the Economic Court of Odesa region. In both cases, a special judicial proceeding is being carried out – the so-called “trial in absentia”.

Another trend in these two cases is a lengthy process of dismissal of judges from their positions, despite the fact that they have been absent at their own workplace for a long time.

In particular, according to the resolution of the Artemivsk city district court of Donetsk region, judge Yukhymuk left Ukraine on 23 January 2016. Since then, he has not returned to the territory of Ukraine. According to the order of the chairman of the Sieverodonetsk City Court of Luhansk region as of 2 February 2016, Yukhymuk was granted a leave from 8 February 2016 to 31 March 2016 inclusive. However, on 1 April 2016, when the leave period was over, the judge did not return to work. Despite the fact that judge Yukhymuk has not been going to work for more than a year – he is still not dismissed.

Interestingly, the disciplinary complaint of the chairman of the Sieverodonetsk City Court of Luhansk region, Luhanskyi Volodymyr Ivanovych regarding the subordinate Yukhymuk was received by the High Council of Justice only on 26 December 2016. This means that the head of the court for almost 9 months “did not notice” that his colleague was absent at work.

It is worth noting that the High Council of Justice decided not to rush with the consideration of the complaint and only on 24 May 2017 (5 months after the complaint was received) opened a disciplinary case against Judge Yukhymuk.

Even more revealing is the lengthy process of dismissal of the fugitive judge Pavlo Medentsev. The Resolution of the High Council of Justice found that since 8 April 2014 judge Medentsev has been absent at work. However, the decree of the President of Ukraine on his dismissal is dated only 16 September 2016. In other words, Medentsev did not go to work for almost two and a half years, but remained in the position of judge.

It should be specifically noted that from time to time, there are quite substantial periods of time between the decisions on procedural matters during the trial.

The most striking example of such extremely lengthy time lapse between the decision on procedural matters during the trial is the Appeal Court of the Donetsk region considering appeals against the decision by which the guilty verdicts was rejected and returned to the prosecutor. Consideration of this procedural matter lasted for about 7 months. This closed the door for any progress in criminal proceedings during the specified period.

Occasionally, delays in court proceedings are caused by transfer of the court hearing or the change of jurisdiction in criminal proceedings. This does not contribute to the speedy administration of justice with respect to those persons. Such a situation violates the rights of the accused who are entitled to trial within a reasonable period of time. It also affects the interests of the public that has a request and expectations for criminal proceedings to be closed within a reasonable time.

It should also be noted that guilty verdicts have already been reached in two criminal proceedings concerning the transfer of an unjustified benefit to a judge. However, in both cases, only intermediaries were punished.

The first criminal proceedings concern the circumstances related, according to the investigation, to the receipt of illegal benefits by the judge of the Sieverodonetsk City Court of Luhansk region Horbatenko Olena Mykhailivna. In particular, on 27 July 2016, a lawyer who received cash in the amount of $ 6,000 to influence the prosecutor and judge Horbatenko was found guilty of committing an offense under Part 2 Article 369-2 of the Criminal Code of Ukraine and was penalized with a fine of UAH 25,500.

The second criminal proceedings concern the circumstances related, according to the investigation, to the receipt of illegal benefit by the judge of the Sieverodonetsk City Court of Luhansk region Yukhymuk. In particular, on 1 August 2017, an individual who received cash in the amount of $ 4,000 was convicted of committing an offense under Part 2 of Article 369-2 of the Criminal Code of Ukraine, and sentenced to 3-year imprisonment. However, the aforementioned person was released from custody by crediting the time spent in pre-trial detention facility to the term of imprisonment.