I want to be a judge assistant 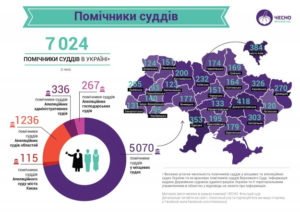 Judicial reform is not just about judges. This fact is often forgotten when it comes to changing, cleansing and upgrading the system.

Together with judges, the judiciary is a formed by an enormous number of people providing the organizational support the court’s operation and, in particular, helping the “servants of Themis” to administer justice.

Judge assistants make a considerable part of the judicial system ensuring the organizational efficiency of a judge and optimizing his/her working time.

7024 – the figure indicating the number of judge assistants in the local and appellate courts of Ukraine. This does not include the assistants of the Supreme Court judges and does not necessarily mean that this is the number of those who are currently employed in the system.

In fact, the number of full-time judges is almost 8.5 thousand, but in recent years a considerable part of them have resigned or was dismissed for violation of the oath, so the courts still lack about a third of “servants of Themis”.

Due to the lack of judges and the need to fill vacant positions, in April 2017 the High Qualifications Commission of Judges (HQCJ) announced the selection of local courts’ judges.

Under the conditions of competition, lawyers with five-year experience and assistant judges with the relevant professional experience of three years have the chance of becoming the judges of the first-instance courts.

For the latter, the HQCJ has developed a special procedure – they have a chance to become judges much earlier than the rest of the applicants. This is due to shorter training at the National School of Judges, which will last 3 months for assistants, and for the rest – 12 months.

The position of the judge assistants is in fact the first step on the way to become a professional judge. For example, at least 11 of the 23 judges of the Desnianskyi District Court of Kyiv city, before being appointed as judges, worked as judge assistants.

Who becomes judge assistants in Ukraine and how?

In accordance with the law, a citizen of Ukraine who has a higher legal education and is fluent in the state language can become a judge assistant. Judge assistants are selected by the judges themselves.

The law does not refer to the competitive selection, internship or raising of qualification of judge assistants. Therefore, in order to become a judge assistant, the candidate in fact needs only a document confirming that he/she has higher legal education. Also, it is important if the judge likes you.

In Ukraine, there are no competition for the position of a judge assistant, and the decision on the candidates is taken individually by the judge him-/herself. Therefore, very often one can often meet judge’s children and relatives working as assistants in the office as indicated in declarations of family ties.

Both of them, as indicated in the declaration of family ties of judge Smokovych M.I., before being appointed as judges, for a long time worked as judge assistants.

Judge assistants play an important role in the judicial process, since they are directly involved in the decision-making.

Judge assistants must minimize the time that “servants of Themis” spend on analysing legal acts, according to which the court case will be resolved.

Judge assistants again, upon instruction of a judge, prepare draft requests, letters, other documents related to the consideration of a case, draft court decisions and other procedural documents, which are adopted by the judge or with the guidance of a judge, and other executive papers.

Therefore, the judge assistants perform a very important work, the results of which directly affect the decisions made by the judge.

In spring 2016, the law on civil service withdrew the status of civil servants for many positions. That included the judge assistants.

Such changes were designed to reduce the “army” of civil servants, for whom the state had significant financial obligations.

Withdrawing the status of civil servant for judge assistants means, among other things, that they are not covered by the law on the prevention of corruption.

At the same time, judge assistants have no restrictions on receiving gifts and do not submit electronic property declarations.

It seems that the judge assistants who select the law to resolve the dispute and – upon instruction of the judge – write draft court decisions may at the same time work in law firms that can serve the interests of the parties in a lawsuit.

In this case, civil society has no control over their work, even by checking their declarations.

The lack of limitations imposed by the Anti-Corruption Law with regard to the judge assistants is an important factor given that the assistants work closely with judges and have access to influence their decisions and also, to important information.

This raises the risks for the assistants being involved in corruption.

One of the illustrative examples is the criminal proceedings against a judge assistant in the Solomianskyi District Court in Kyiv city, who, according to the investigation, in May-June 2016 accepted the offer of her friend, a lawyer, interested in the investigation of one of the criminal proceedings by NABU, and started to feed him information when the court received the requests from the Bureau’s detectives so he could further inform the third parties.

On 13 December 2017, the Solomianskyi district court in Kyiv city received the indictment against the judge assistant.

The judge assistant of the Kyiv City Court of Appeal, according to the investigation, misled the other person regarding the possibility of influencing a positive decision in his favour by the panel of judges of the High Specialized Court for the Civil and Criminal Cases for the amount of USD23,000 (more than UAH627,000).

By searching the Internet, one can find a lot of information about corruption incidents involving judge assistants, which are, in most cases, very similar to the above criminal cases.

The existence of such criminal proceedings is an additional proof of significant corruption-related risks that affect the work of the judge assistants and the quality of justice in general.

Therefore, the lack of leverage to control the work of judge assistants for the state and society will only increase corruption-related risks and promote impunity.

Analysing the foregoing, one can say that when working on the judicial reform, not enough attention was paid to such an important part of the judicial system as judge assistants.

As a result, we have a situation with significant corruption-related risks i.e. the appointment of a judge assistant. And it is up to the judge him-/herself to resolve it. This position gives privileges when a person is further appointed as a judge, and also allows judges to control the activities of their assistants.

The critically low level of public confidence in the judiciary and justice in Ukraine in general suggests that not only some parts of the system but all its complex components must be reformed.

Liliya Drozdyk, Ivan Piatak, CHESNO.Filter the Judiciary!, specially for the UP (link to the original source of material is published in Ukrainska Prava at https://www.pravda.com.ua/columns/2018/02/5/7170599/)