8 Million as a gift: Analysis of Declarations of Judges of the Economic Court of Kyiv city

During 2014-2016, the judges of the Economic Court of Kyiv city and their family members received over UAH 8 million as a gift. These and other data from the judges’ declarations were collected, analysed and systematized by the CHESNO Movement as part CHESNO. Filter the Judiciary! Campaign.

CHESNO. Filter the Judiciary! has prepared infographics that illustrates which judges or members of their families received the greatest amount as a gift. The most significant gifts were received by Vadym Bosyi (2.5 million), Serhii Stasiuk (1 million and 390 thousand), Dmytro Baranov (1 million and 330 thousand), Inna Otrosh (1 million and 83 thousand), Viktoriia Sivakova (720 thousand). 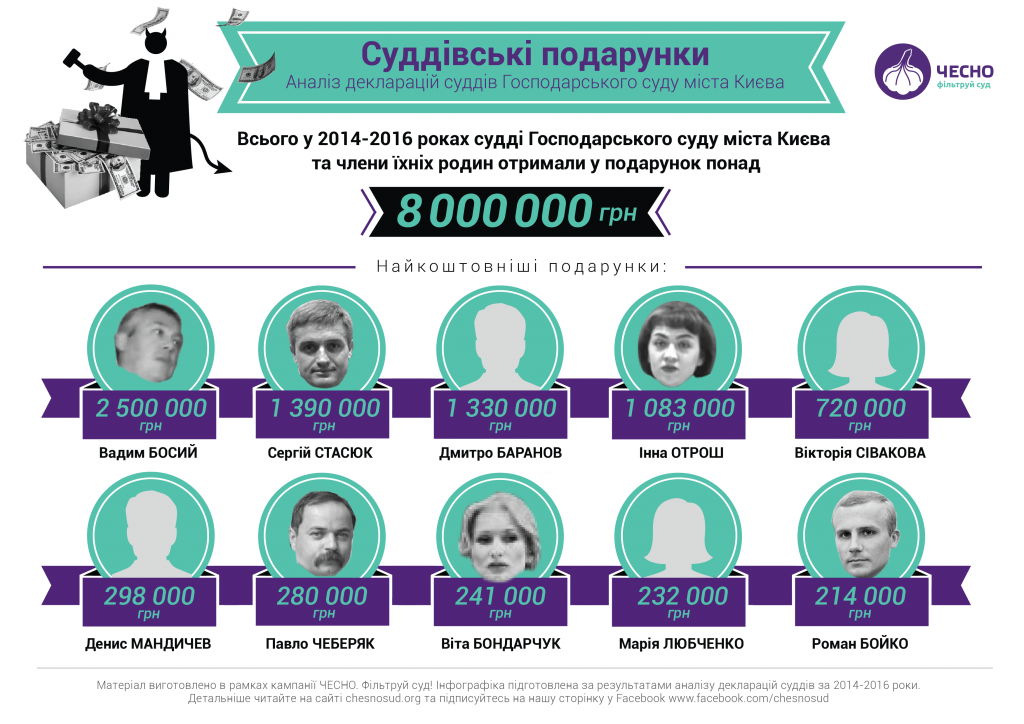 Significantly, almost all cash gifts were received by judges, probably from their family members – parents, mothers, husbands or wives. Perhaps these judges are indeed got very lucky with their close relatives. So, looks like for the period from 2014 to 2016 the following judges received the presents from their fathers: judge Vadym Bosyi (2 million), Bondarchuk Vita (241 thousand), Stasiuk Serhii (1 million and 390 thousand), Liubchenko Mariia (120 thousand). During the same period, Boiko Roman (214 thousand), Kotkov Oleksandr (149 thousand) and Cheberiak Pavlo (280 thousand) received the gifts probably from their mothers.

To recap, according to Article 23 of the Law “On Prevention of Corruption”, the restriction on the value of gifts does not apply to gifts received from close persons.

The CHESNO movement collects information from publicly available sources and does not allege that a person has committed an offence or is guilty of it. Conclusions made by CHESHO as to the association of the candidates with corruption and dubious decisions constitute the value judgments which may not correspond to the official decisions and conclusions of the government authorities.